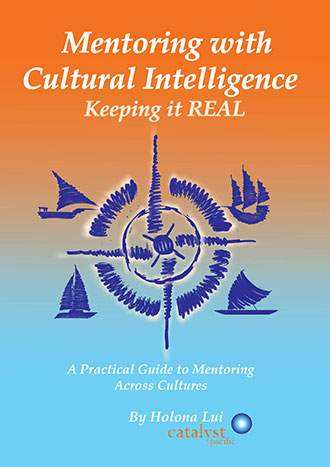 offers a practical approach for businesses and organisations to accelerate the productivity of their people across cultures and borders.

Learn practical tips and strategies to sharpen your mentoring skills

What People Are Saying

Don’t just take it from us, let others do the talking!

“a resourceful and uncomplicated guidebook”

“It is invigorating to have culture and mentoring come together in a superbly confident synergy, rather than being discussed as two separate elements.”

“I found this guide an easy and valuable read,  and the coaching/mentoring distinctions particularly useful especially given the clients I was working with at the time.

I am sure this book has wide audience potential not only in a cross-cultural context but beyond.”

Let us tell you more

Mentoring with Cultural Intelligence offers a practical approach for businesses and organisations to accelerate the productivity of their people across cultures and borders.

Faster staff development, future proofing, knowledge transfer and succession planning is needed more than ever in this time of increased mobility.

The 21st century world has become ‘flatter.’ We have greater globalisation with increased trade, travel, labour and population mobility across oceans, time zones, cultures and borders.

Mentoring with cultural intelligence is an essential 21st Century skill for all sectors of the economy from small businesses to multinational corporations.

Cost and and payment

Mentoring with Cultural Intelligence: Keeping it Real is your guide book. ebook PDF, NZ$25 including GST.

People who pre-ordered the book will receive a discount coupon.

Review of “Mentoring with Cultural Intelligence: Keeping it REAL”

The breadth of mentoring literature that has been researched and/or based within Aotearoa New Zealand contexts can be described as limited. In terms of the needs of the field, the demands of cultural understandings is on the increase. Further the attention on cultural perspectives and approaches in mentoring is also absent. So, when Holona approached me with his guidebook, I immediately became interested and excited in his proposed publication as a reviewer.

It is timely that this text has been created as mentoring is a fast growing movement for at least the past twenty years in Aotearoa New Zealand, with roots of development locked into much of the Western research. Critically speaking mentoring has originated from Eurocentric frames that do not always complement culturally diverse groups of people. The need for more culturally-based texts is required, with urgency as mentoring extends into communities that are not mono-cultural. Therefore I see this guidebook as being practical for a wide range of mentoring services and people-centred professions, such as teaching, policing, and nursing (to name but a few).

In my experience as a mentoring researcher/practitioner, mentoring guidebooks can be text-heavy and complex but Holona’s guidebook comes across accessible and reader-friendly. Accessibility allows multiple audiences to use the book according to the needs of their mentoring context. For example, this book could be relevant for the business field or for youth in the community or for police officers, or for teachers — and the list goes on.

the significance of mentoring, the difference between mentoring and coaching, how to become an effective mentor and the notion of cultural capital in the mentoring process

The book is divided into two distinctive parts. Part one covers with clarity, the broader explanations and significance of mentoring, the difference between mentoring and coaching, how to become an effective mentor and the notion of cultural capital in the mentoring process. People often become confused about the major differences and similarities between mentoring and coaching but in this text a succinct presentation of the two processes are brought together in an educative and concise manner.

The sections provide an introduction to the foundations of mentoring and in “keeping it real”, are designed to present some of the key ideas pertinent in supporting people. There are several standout points in the text but one significant quotation on page eight reads;

“Mentoring across cultures is special. It requires a deeper understanding and an appreciation of the different culture and value sets, and influences that are at play with the mentoring relationship.”

For me, the quotation emphasises a distinctive characteristic of the cultural dimension in mentoring. Terms such as deeper and appreciation provide and insightful and reflective delving into a person-centred approach to the guidebook, requiring the mentor to explore the process of the relationship. And the relationship in mentoring is central to the success of the process.

encourages the reader to be reflective — a crucial part of mentoring

Moreover, I believe a strength of the guidebook is the way in which Holona subtly encourages the reader to be reflective — a crucial part of mentoring. The process of reflecting is not an easy task for anyone but through the book, I get a sense of the reflective approach that the reader can embark on.

The beginning of Part two narrows in on cultural intelligence and mentoring. Here the attention is on the effective intercultural mentor. It is invigorating to have culture and mentoring come together in a superbly confident synergy, rather than being discussed as two separate elements. Further along, the inclusion of the appreciative approach in cross-cultural mentoring and exemplifies a constructive and appealing method to understanding people. The attention is on strengths and in line with popular positive psychology.

illustrate[s] the deeper understandings of the mentoring process that includes cultural knowledge, values and skills

In bringing together cultural intelligence, mentoring and appreciative development — the reader is also drawn into thinking about metaphors for mentoring. The coverage of cultural perspectives and approaches is not at all superficial and extremely vital explanations of culture, and the model of the cultural iceberg/atoll are woven together to illustrate the deeper understandings of the mentoring process that includes cultural knowledge, values and skills.

a refreshing and insightful method of explanation for cultural differences

I enjoyed the addition of cultural influences and values set in the domains of Western, Eastern and Pacific cultures. Again, this is a refreshing and insightful method of explanation for cultural differences.

While the book has a consistently positive and appreciative approach there is room for attending to mentoring challenges and Holona provides the acronym REAL as practical tips and strategies that help to mitigate possible tensions in a cross-cultural environment. The highly successful model GROW (Goal, reality, options and way forward) model which is typically used in coaching situations has also been connected to mentoring across cultures — this is delightfully practical for any mentor to use.

The “keeping it real” theme is strongly endorsed in the discussion of the GROW model, with the provision of strategies and case study scenarios to support the GROW process. Overall this section on culture and mentoring has appeal and is clear for a wide range of people to grasp the key concepts with the focus on building strong mentoring relationships.

a teaching resource for mentors in training

Overall, Holona’s guidebook has immense value. I see this as being a particularly useful text for many different groups of mentoring practitioners and students. He has used tables, diagrams and images to appeal to different types of learners/readers. Anyone that is keen to further their learning about mentoring would find this book useful. I hope that the text is distributed widely and that it becomes a teaching resource for mentors in training. Often people sign up to become mentors but without any mentoring experience, so I envision that a text like this allows people to be reflective of their own life experiences and utilise such experiences to infuse potential mentoring relationships.

a resourceful and uncomplicated guidebook

This is a resourceful and uncomplicated guidebook, focused on the nature of mentoring relationships — and it is something that many of us can lose sight of in an increasingly busy world dominated by social media and tensions. Therefore I fully commend Holona (and his production team) for bringing this book together, as anyone who helps individuals to flourish, can be called a hero in the name of people-development.

Hear about our latest articles.

Welcome. You have subscribed.